Right now, I am sitting at the train station in Batumi, scribbling away before my next journey. I’ve already had to change seats three times in the last hour that I’ve been here. Why? A man sat down two seats away from me and stared at me until I felt so uncomfortable I had to move. I moved again when I noticed I was still in his line of sight and went to sit outside by other women waiting for the train.

A week ago, a man staring at me for inappropriate periods of time would not have bothered me. I’m used to it, it is a phenomenon that has been happening my whole life, and as a tall, blue eyed, blue haired person I attract more of it when I’m abroad. Over the years, I’ve numbed myself to it but that all changed a few days ago in Yerevan.

One of the things I love about solo travel turned into something sinister. I realised how much of a target I am as a woman going about my life alone. I became the embodiment of one of those feminist posts highlighting the misogyny in the world that I’m always sharing on Facebook.

With Johannesburg not being the safest city in the world to walk around in, I get a kick out of walking when I’m abroad. Not only do I feel safe, but it’s how I prefer to discover a place, a self-guided walking tour with no destination in mind.

Today, I couldn’t even bring myself to walk 2 km to the train station in Batumi.

Because I experienced sexual harassment on multiple occasions in Yerevan, Armenia – the worst incident occurring while I walked to the genocide memorial.

I was less than 15 minutes away when I attracted the attention of the biggest asshole I’ve ever met. I wasn’t wearing any make-up, my hair wasn’t brushed, and I looked like the definition of a dirty hippie. However, something about me (my vagina) told him that he needed to insert himself into my life.

He ran up to me, asking where I’m going and that he wanted to help me. I told him no and immediately turned down a street to try to get rid of him. Unfortunately, he didn’t take the hint and continued to follow me, lightly touching my arm and telling me in broken English that I’m beautiful.

His behaviour kicked in my spidey-sense, and alarm bells started going off. My mind racing about what I could use as a weapon in my bag. Fortunately, this road was not empty, as it had a gym and a few other buildings. In hindsight, I wish I had gone inside the gym, but I kept walking, realising a bit too late that the road had become a dead end. My first reaction was to walk up some stairs that lead to a concrete rooftop over a parking lot.

This is where things started to go wrong. In a bid to just keep moving, I had walked up to a place that was now deserted and created the perfect opportunity for this asshole to up his game. He once again touched my arm, grabbing it this time to tell me again that he thinks I’m beautiful.

I managed to squirm away, telling him not to touch me before I bolted to the opposite end of the rooftop and jumped down to another set of stairs. He shouted at me to stop, and as I ran into the gym, I still felt guilty that I was being rude.

A random man had creeped me out so much that I felt I needed to run away and I was the one feeling guilty. It’s the fucked up “be polite” mentality that society instils in girls from a young age, and I found myself infected with it.

I found myself thinking about a quote I had seen on Facebook that week: “Men will call women paranoid and resent us for treating men as if they might become dangerous, but if we do get hurt, they’ll turn around and blame us for being stupid and naive.”

I called a taxi to take me the rest of the way to the museum and did the same when I left, too on edge to walk to the nearby bus station.

The next day I took the local bus to the Khor Virap monastery. While walking from the main road up to the parking lot, I had a car follow me and offering to give me a lift. Again I said no and kept on walking. The car continued to trail me; the men kept asking me to get in until they eventually turned around and sped off.

On my way back to the bus stop, the same car appeared yet again, this time trying to lure me to the car with fruit. After telling the driver no repeatedly, he drove to the top of the street and parked his car. Once I arrived, he turned the car on and started to drive towards where I was waiting for the bus.

I immediately crossed the road, and he had no choice but to continue down the road thanks to traffic.

On the train from Yerevan to Batumi, it didn’t get much better. A group of young men from the army had bunks right by the bathroom and made me feel so uncomfortable that I was too scared to pee for the next few hours.

After coming out the bathroom the first time, cat calling followed as well as kissing noises. I eventually discovered another bathroom in the opposite direction that the staff used and avoided the other end of the train at all costs.

This last incident might seem minor, but with everything that happened before, it didn’t make me feel safe about going into an enclosed space with perverts lurking outside. 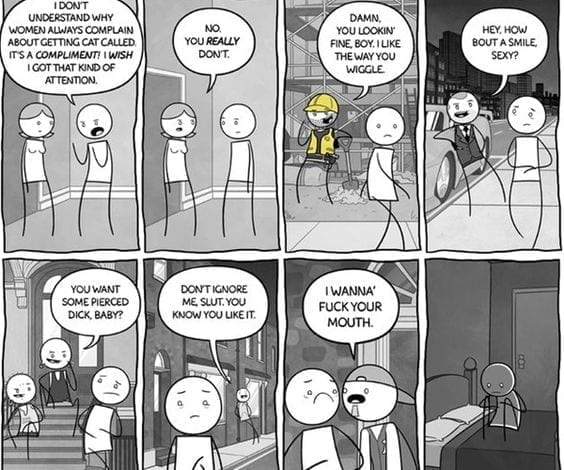 – What is wrong with men in the world? –

My initial reaction to all of this was: why me? What did I do to attract this negative attention? Is it simply because I am a foreign woman with blue hair and I’m asking for it?

The problem with this line of thinking is that it places the blame on me instead of the person responsible. Women and girls don’t get sexually harassed because of how they look or what they wear; it happens because 50% of the population doesn’t respect us.

Yet, people still say that rape culture doesn’t exist, and only women in oppressed countries need equality. Curiously, these opinions always come from those that have never been afraid of half the population.

If you’re thinking: “Gee, Lauren, you should invest in self-defense classes or pepper spray” that is not a solution. It’s not fair that I have to make sure I’m prepared in case someone feels like disrespecting me. No one tells men to attend “How Not To Be a Creep” and “Understanding Consent” classes when it is their behaviour terrorising women around the world.

And if you are a man reading this, it’s not about “not all men”, it’s about the fact that all women have been menaced by men at some point in their lives.

While incidents like these will never stop me from travelling, especially solo, it’s had an effect on me, and ironically, that’s why we travel. And while this post is not meant to discourage anyone from visiting Armenia, it is intended to start a conversation.

Sexual harassment solo female travellers experience is rarely discussed and should be used to create awareness and a discussion among both sexes, not scare us away from a destination.

For solo female travellers, sexual harassment is not out of the ordinary. While I'm used to the odd catcall, my recent trip to Armenia was on another level.